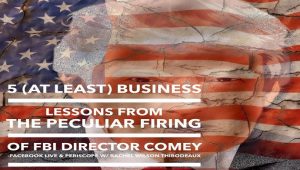 The power of social media never ceases to amaze me. I know I am not alone in finding out about the recent blockbuster development out of Washington – not from Fox News, MSNBC, CNN, Bloomberg, or BBC – but from my Facebook news feed (there’s a bonus lesson in that if you’re paying attention).

To be specific, an old high school buddy posted that she’d awakened to find out the FBI Director had been fired. She said she wondered if we’re watching the “governmental” version of The Apprentice. I thought that was kind of funny.

So ladies and gentlemen here we are. Let me say this is not a political piece. Not really. I mean, I suppose it could be seen that way. Some inevitably will see it that way. Whatever (I don’t say “whatever” just to be flip or annoying. I say it because as a member of Generation X, I take pleasure in still being able to look and sound like a millennial, at least sometimes).

Make no mistake. I’m a somewhat recovering political junkie. There are plenty of times my mind is on my politics and politics are on my mind (shot out to hip-hop greats Snoop Dogg and Dr. Dre for giving us such a cool, unforgettable lyric on which I can now put a cool spin on).

It didn’t take long for me to come up with several key lessons we can glean from this high-profile firing. Frankly, these lessons can also apply to other aspects of our lives. For the sake of time and context, let’s focus on the role they play in business. I decided to write about it. Want to hear it? Here it goes:

1.    Inconsistency typically is a problem. Hey, I understand inconsistency. I’ve been known to be consistently inconsistent myself. However, I DO know there are consequences. I’ve EXPERIENCED the consequences, which is why I’m a big advocate of consistency. It matters. It leads to action. It also leads to credibility and trust. Remember those two little things? They matter a hell of a lot in politics as well as in business. Try being inconsistent with your prospects, clients, audience, partners and see where that gets you. You’ll get less trust, less positive word-of-mouth, less support and less income (it may not happen immediately but it will happen). Trump was a big supporter of Comey during last year’s election. He particularly supported Comey’s handling of the Clinton email investigation. Now, Trump is not at all pleased with him. Now, Comey has “committed atrocities as FBI Director.” Sounds inconsistent and a little peculiar to me. As a brand strategist and content creator, it’s super important for me to be consistent in my brand messaging. This is something I relentlessly push with my clients. The content I create in Q1 should be consistent with my content in Q3. The message you share on Tuesday should be the same message you share on Thursday. Brands evolve, but unless they absolutely sucked from the beginning, they should not look/sound/feel completely different.

2.    Optics DO matter. Yes they do. Yes it’s kind of politically correct which I’m not really a big fan of, but true. I’ve never heard the term ‘optics’ more than I have in politics. It’s kind of a fancy kind of a word that really just means appearance, or perhaps perception. Ever hear “perception is reality?” Often it is. President Trump and his trusted advisors had to know how this decision to fire Comey (especially when he did) would look. It ain’t good. To fire the FBI Director who is handling an investigation of the President’s ties to Russia, who presumably has damaging information about those alleged ties, not only looks bad. It smells bad. Most of us (and I’m convinced this also includes Beyonce, Halle Berry, and Angelina Jolie) don’t look our best as soon as we wake up in the morning. We don’t look good, and our breath doesn’t smell good (yes Beyonce too) either. It’s a double whammy. We don’t meet with clients, or give presentations, or pitch investors as soon as we wake up because we don’t look so good. The presentation or pitch may still be awesome. The optics not so much. Since our businesses and business decisions typically are not just about us, we cannot afford to completely ignore how things look to others. How your target market perceives your brand is critical. Once they’re giving you the side-eye (also not the best look), you’ve got a problem.

3.    If you have something to hide, don’t act like you have something to hide. I think this is pretty much self-explanatory. If not, let me say something I said above in a different way: you don’t fire/prosecute/attempt to discredit anyone who has the authority and responsibility to investigate your alleged wrong doing, especially if there really has been no wrong doing. If there HAS been wrong doing, why make it look like there has been. Ok I wasn’t going to say it, but I really think it’s warranted here: duh.

4.    Know the cost of losing your current supporters. We can substitute ‘customers’ ‘clients’ ‘readers’ ‘donors’ or ‘partners’ for supporters. They’re all important. Of course, ultimately those other terms demonstrate support. Arguably, the president has taken more than one action since coming into office that his supporters have not approved of. This latest one could be especially costly among his supporters. Can we agree that most, if not all, powerful people (and businesses) have their detractors? Some would say enemies. It’s enough to effectively manage the haters. Why risk alienating (or downright pissing off) your supporters if you don’t have to? Especially when it can take months, years, or even forever to regain their support. This is not just a rhetorical question. I’ll wait.

5.    Be careful how you treat (other) powerful people. Notice I said ‘other powerful people.’ That’s provided you’re powerful to begin with. This is even more key if you have no power. Please don’t misunderstand me. There is certainly a time for people with little-to-no power to rise up against the powers that be. Sometimes, it’s necessary to take back power. Even then, one has to be very aware of the consequences of one’s actions. Sure the POTUS is powerful. He’s the leader of the free world, yada yada. Last I checked, though, the FBI Director has some power as well. The FBI Director has allies, connections, favors owed him, sensitive information. The same information that can possibly hurt Trump. Ok, Trump decides to fire the guy. Could he have not called him? It was reported that Comey found out the same way many other people found out: from the news. It’s kind of known that powerful people, especially powerful men, can have delicate egos and long memories. Entrepreneurs, small business owners, brand builders, business leaders, experts, please repeat after me: don’t burn bridges you cannot rebuild. Better yet, try not to burn bridges period.

Perhaps after we have more information, this firing will be less peculiar (anything is possible, right?), but more than likely, it will still show inconsistency, terrible optics, appear that something is being hidden, discount supporters, and show a lack of respect for someone who deserves respect. In case you’re not absolutely clear, none of that works well in politics, and I’ve never seen it work in business.

I’m just waiting for the next episode of Saturday Night Live. I expect it will be epic after all this. Come on…I know I’m not the only one.

©2017 by Rachel Wilson Thibodeaux. All Rights Reserved. Rachel Wilson Thibodeaux, also known online as the SWAG Strategist, is an award-winning speaker, brand and business strategist, and founder of SWAG Strategy Solutions (SWAG -Strategic Women Achieve Growth). She is also the creator of the Brand. Sell. Profit.™ system. Brand. Sell. Profit.™ is for those who want to build a remarkable brand, sell like a winner, and profit like a boss! It’s also for those who need help with connecting the dots between a great brand and a great bottom line. Rachel is also a sought-after social media marketing consultant, specializing in LinkedIn, Facebook, and live streaming. Connect with her on LinkedIn at www.linkedin.com/in/RachelWThibodeaux  For more information and some awesome FREE resources, visit her website at www.swagstrategy.com