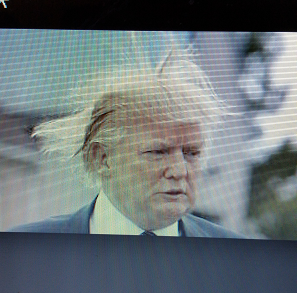 Yes you read that right. This is not so much about Donald Trump, as it is about his hair.

We hear a LOT, especially lately, about Donald Trump. There is no shortage of content out there about Mr. Trump.  He kind of has a way of attracting attention. Whether you’re a fan or foe, tired of hearing his name, secretly want to be him, or all the above, he’s hard to ignore.

His hair can be just as hard to ignore.

Often, we hear about his brand and what we can learn from it. I allow for there being people who do not find any redeeming value in his brand. However I feel about “the Donald” personally, I’m not one of those people. Nevertheless, let’s take this a step further (as I tend to do…my mind goes to odd places like that).  I’ve found seven things we mere mortals can learn from the Trumpster’s hair.

I don’t know if anyone has ever named Donald’s hair. I think it warrants its own name. From here on out, let’s call the hair Dan.  Here are seven things you can learn from Dan about creating a killer brand.

There you go. Seven lessons you can take away from the mop…I mean the hair actually growing out of Donald Trump’s head. I’m sure he would say these are absolutely the biggest, most important, most amazing lessons you can get. Hey, if Donald said it, you at least have to consider it, right?

We use cookies to ensure that we give you the best experience on our website. If you continue to use this site we will assume that you are happy with it. Terms of Conditions Privacy policyOk